Home Balearics Articles The Balearic Islands, What Are Their Names And Which Are Largest?

The four main Balearic Islands lie off the eastern coast of mainland Spain. These islands include Majorca, Ibiza, Menorca and Formentera.

If you would like to quickly navigate to a certain island, please use our quick links in orange just below.

The Balearic Islands, The 4 Main Islands

The Balearic Islands are a grouping of tiny islands and islets known as an archipelago. Much the same as the 7 Canary Islands in the Atlantic Ocean. These islands together also form one of the 17 regions of Spain, another thing they share in common with the Canaries. This island chain actually comprises of over 100 small islands and islets. Many of which remain uninhabited.

The four main islands are all popular tourist destinations which attract northern Europeans. Millions each year travel south to enjoy the excellent climate on offer.

Generally speaking, the different languages and spelling of these islands can be confusing. As a result, the Brits especially appear to have invented their own names for some islands.

The Catalan name is Illes Balears while in Spanish the translation is Las Islas Baleares. Mallorca would be a good example of what the Brits refer to as Majorca. Below we will use the names that the Brits are familiar with.

This grouping of islands is also one of the top tourism locations in Europe. Some 13 million tourists visited the Balearic Islands in 2014. Below we give an introduction to each of the main islands and some points of interest for each

Majorca (Mallorca): The Largest Of The Balearic Isles, (Population 925,000)

Majorca is by far the biggest of the Balearic Islands in both land mass and population. This island is popular with the German and British nationalities. These two nations make up a good chunk of the yearly visitors to this pretty island.

The fantastic beaches here (as shown above) are one of the many super attractions. The population here is around 850,000 inhabitants. In fact, this is the vast majority of the 1.1 million total population of the Balearic’s. There are well over 40 resorts in Majorca, many of which we have written articles for.

Ibiza or Eivissa as it’s known in Catalan is actually smaller in land mass than Menorca. It still has a bigger population. Currently there are around 130,000 permanent inhabitants in Ibiza. These numbers swell along the 150 km coastline during the summer months.

In fact, Ibiza is also one of the top locations for nightlife in Spain. This island welcomes well over 2 million international visitors a year to it’s shores.

Menorca is larger than Ibiza for land mass but has a smaller population. There are around 100,000 permanent inhabitants here. Menorca is not as vibrant as Ibiza or Majorca for nightlife. For the most part, this island is better suited to those that are looking for a quiet relaxing holiday.

This island is famous for it’s many Megalithic sites and T-shaped altars. These are visible all across the island and date back to 2000 BC. Talatí de Dalt, Torretrencada and Trépuco are three of the most important sites.

Mahón or Maó in Catalan is the capital of Menorca where a third of the population live. A further third live in Ciutadella de Menorca. Many smaller districts make up the rest of the local population. This island has many beautiful beaches and coves . These include Cala Macarelleta and Cala en Turqueta (pictured above). Both are famous for the turquoise Sea colour.

Formentera is the smallest of the Balearic Islands with a total length of 19 km. The population here is 9,500 inhabitants. This island lies 6 km south of Ibiza. Formentera is well known for it’s white beaches and much slower pace of life. This is a stark contrast to it’s vibrant neighbouring island.

Formentera contains many small districts which are no bigger than villages. These include San Fernando, La Savina, Es Pujols and San Francisco among others. A tiny island in it’s own right, Formentera is surrounded by many smaller uninhabited islets.

Before tourism, salt and agriculture were the major contributors to the economy. This is as recent as the 1980’s. Being a tiny island, there is no airport in Formentera. Visitors will need to catch a ferry from Ibiza which takes around 30 minutes.

Balearic Islands Map & Where To Find Them

The map below displays the main islands that form the Balearics. So where are the Balearic Islands and how many islands are there? The Balearics lie 300 kilometers off the eastern coast of mainland Spain. There are 4 main islands in total with over 100 tiny islets which form this archipelago. 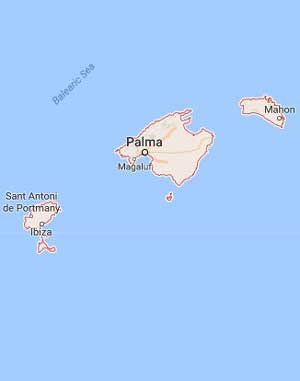 Majorca is by far the largest of the Balearic Islands with a land mass of 3,640 km². Majorca is also the biggest of the Spanish Islands. This also includes the Canary Islands in the Atlantic Ocean.

The population of Majorca is around 850,000 inhabitants. Over 400,000 of the total population live in the capital city Palma de Mallorca which is also the capital of the Balearic Islands.

The second largest Balearic Island is Menorca which has a land mass of 696.7 km². Menorca has a population of around 100,000 inhabitants.

Formentera also has the smallest land mass of any of the major Spanish islands.

Ibiza is the second smallest with a land mass of 571.6 km². The population of Ibiza is around 130,000 inhabitants.