Home Canaries Articles Fuerteventura, Things To Do & Places To See 2020

The beautiful island of Fuerteventura lies to the south of Lanzarote and to the east of Gran Canaria. This island has the second biggest land mass of the 7 Canary Islands. Only Tenerife covers a bigger area.

Despite being the second biggest, the population of Fuerteventura is 110,000 inhabitants. Both Lanzarote and Gran Canaria, although smaller in size have a bigger population.

Top Attractions & Things to do in Fuerteventura

There is much debate about the literal translation of Fuerteventura. “Strong Winds” and “Great Adventure” are among the suggestions. Fuerteventura is best known for it’s many beautiful beaches which line it’s coast. There are over 150 in total, many of the best beaches in the Canary Islands are here. Below are some of the top things to do here during your visit.

Isla de Lobos is a tiny island that lies 2 km’s off the north coast of Fuerteventura. This is one of the top day trips and must visit attractions here. Isla de Lobos is no longer inhabited, nobody has lived here since the 1960’s. When the lighthouse became automatic, the keeper and his family were the last to leave.

Exploring this pretty tropical island is popular with adventure seekers and hikers. Fishing and sun bathing are also activities which draw the visitors.

The ferry leaves from the popular town of Corralejo four times each day. You can leave as early as 10 am or as late as 1 pm. Most trips allow you around 4 hours on the island. The journey only takes 15 minutes each way but there are other options available. You could take an hour boat trip that explores the southern coast of Isla de Lobos. You will also get to see the small harbour and river among other points of interest.

The ticket prices for the normal trip are 15 € each way. Many choose to pay a little extra and enjoy some scuba diving which is also offered by the boat trip company.

Their boat has a glass bottom which offers a spectacular glimpse of the marine life down below. This is an excellent trip and well worth considering when you visit Fuerteventura.

The patron of Fuerteventura lies to the west of the village of Vega de Rio Palmas. This ancient rock chapel is only accessible via a hiking trail. La Virgen de la Peña inside the chapel is one of the oldest sculptures in the Canary Islands. The patron of this island is also the most remote of the 7 main islands. Please visit this link to find the directions and map of the chapel. There is little information available in English for this attraction so we hope the map helps. 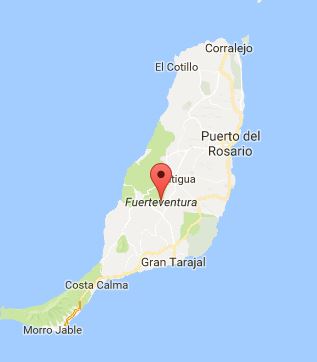 Fuerteventura enjoys excellent weather and a sub-tropical climate all year round. The summers can seem much hotter with the Sahara Desert blowing hot air to Fuerteventura. Conditions in spring are quite mild with temperatures beginning to improve during March and April.
The winters here are also mild with the temperature never dropping much below 15 Celsius.

Playa de Cofete is one of the top beaches on the island and indeed the Canary Islands. The white sand stretches for as far as the eye can see. Playa de Cofete is not as accessible as some beaches but is well worth the effort. You are well away from the mainstream tourist spots to enjoy this piece of paradise. This beach lies in Morro del Jable in Jandia.

The Natural Park of Corralejo is one of the leading attractions of this island. Here you have a combination of wildlife, sand dunes and amazing beaches. The sea is a turquoise crystal clear colour that becomes darker the deeper it gets. You are also treated to stunning views of Isla de Lobos which faces this resort.

Oasis Park interactive zoo is another of the top attractions in Fuerteventura. This super park boasts all types of live shows and experiences that thrill audiences.

The live shows include Parrots, Sea Lions, Birds of Prey and Fauna. You can get up close and personal with the animals or watch on large and small TV sets.

Oasis Park also offers many different experiences to interact with the animals. The main encounters are with Sea Lions, Lemurs and a super Camel safari. A few other experience to mention are photographs with animals and food bags. You can buy food bags made for each animal which contains their perfect food for their diets.

This super park is open for 365 days of the year. You can get the free bus from most of the popular hotels and resorts on the island. There some great discounts on tickets prices, the stands adult fee is 33 € with children 19,50 €. The experiences will cost you extra but are still great value.

More Things to do in Fuerteventura

Acua Park lies in the popular town of Corralejo in northern Fuerteventura. This water park boast 17 attractions which includes the services on offer.

Most of the attractions here are suitable for children which makes this a fun day out for all the family. There are several slides that are more suitable for adults but these are few. Acua Park is quite small in comparison to some of the bigger water parks in the Canary Islands.

Some hotels and package holidays include tickets to Acua Park. The fee of 28 € for adults may be on the steep side when you consider the size of this aqua park. It may be worth buying online as adult tickets are 25 € with children’s 19 €.

This island is home to some fantastic resorts which welcome millions each year. The entire coastline contains some of the top beaches in the Canary Islands.

In the south of the island are the resorts of Jandia, Morro Jable and Costa Calma. On the eastern coast we have Caleta de Fuste and the capital city Puerto del Rosario. Corralejo is one of the top resorts here which lies in the north. The super natural park and Isla de Lobos are the popular attractions here.

If you run out of resorts to check out here then you could also take the ferry to Lanzarote. This beautiful island lies to the north and boasts many more great beaches and resorts. Playa Blanca and Puerto de Carmen are the pick

Tenerife Attractions & Best Things To Do During Your Visit