La Palma is the most western of the Canary Islands and the fifth largest for land mass. The population of this island is also the fifth biggest of the Canaries with around 85,000 inhabitants. One of the main attractions of the La Palma is the Roque de los Muchachos Peaks. These majestic peaks have an elevation of 2426 m above sea level, second only to Mount Teide in Tenerife.

Santa Cruz de la Palma is the capital city of La Palma. This City lies on the eastern coast, north of the beautiful port (pictured above). In the centre of the island is the Caldera de Taburiente National Park. One of the four main national parks of the Canaries.

This beautiful island is serviced by La Palma Airport which is lies on the eastern coast. La Palma has many dark sandy beaches thanks to the volcanic nature of the island. The top beaches here include Puerto Naos, Charco Verde and Nogales beach.

Los Llanos de Aridane is lies on the western coast of the island and has a population of around 20,000 inhabitants. This is the biggest municipality in La Palma and an interesting place to pay a visit. Two of the main beaches here have black sand. Puerto Naos and Charco Verde, both have previous been awarded Blue Flag Certification. Below we list several other interesting things to do in Los Llanos during your stay.

Snorkelling & Diving are particularly popular activities in Los Llanos. The waters are crystal clear on the western coast. This provides for an unforgettable experience.

Plaza La Glorieta is a must visit for any art lovers. Especially those that are interested in fine mosaics. The entire plaza is decorated with colourful intricate mosaic along the paths. Also there are ornamental rest areas and various objects designed with mosaic.

Santa Cruz de La Palma is the capital of La Palma. This area has the second biggest population of around 17,000 inhabitants. The houses here are painted in many different colours. The streets are lined with cobbled stone. Santa Cruz is one of the top urban areas of the Canary Islands.

The port of Santa Cruz de la Palma lies to the south of the City. This port one of the most important to the Spanish Empire due to it’s strategic location in the Atlantic. Santa Cruz was a big exporter of sugar from Aridane and Los Sauces along with wine. The port here has led to many attempts to capture it. The French fleet and later the British led by Francis Drake have attempted to capture the city.

Below is a clickable image to view a full size Google map of La Palma and surrounding areas. 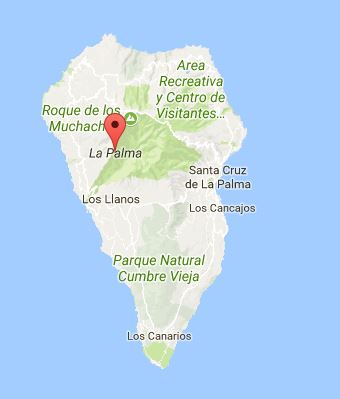 Bus Tours and Guided Walks are among the top activities here. There are many excellent hiking and walking trails to enjoy. This island is quite green. here You will find lush forests and many tunnels along the walking trails. The mountainous trails will take you to some of the highest peaks and points of the island. These include Roque de Los Muchachos up to an altitude of 2426 metres.