Often shortened to Palma, this city boasts some of the top attractions in Spain. Palma city lies in southern Majorca to the west of Palma airport. The southern areas of the city sit on the Badia de (bay of) Mallorca. This is where you will find many of the top tourist resorts on the island.

Top Attractions & Things to do in Palma de Mallorca

Palma de Mallorca is the cultural heartbeat of the island. Here there are great attractions and things to do to suit all types of traveller.

From cathedrals, castles and ruins that date back hundreds of years, there is much to admire here. The Romans settled here before the birth of Christ but much of the architecture is either later or constructed during the Muslim occupation.

Palma and the island of Majorca remained under Muslim rule for over 300 years. The Conquest of Majorca led by King James I of Aragon saw the island reclaimed by the Christians in 1229.

Below are a few of our favourite attractions in this magnificent city.

Palma Cathedral of Santa Maria (Saint Maria) or abbreviated to La Seu (The Headquarters). This is a Roman Catholic Gothic style cathedral in Palma.

Construction began in 1229 on the site of an old Moorish Mosque. This was after the city was re-captured from the Muslims. A Gothic architectural masterpiece with a length of 121 metres and width of 55 metres. Palma Cathedral was not completed until 1601.

A noticeable influence from architect Antoni Gaudí can be seen throughout the cathedral. Gaudi worked on the restoration of La Seu in the early 1900’s. Many of his ideas have been incorporated. La Seu is open all year with ticket prices of between 3.50 € – 6 €.

This unique castle has a height of 112 metres. It’s considered to be one of the top places of cultural interest on the island of Majorca. The castle was the home of King James I who was also responsible for it’s construction.

A fortified building with unique circular towers. It contains a bridge and a moat are among the defensive features of this ancient castle. Tickets are priced at 4 € for adult tourists. Some discounts are availble for youngsters, pensioners and groups.

The normal opening times are 10am – 6pm for much of the year, please note that the castle does not open on Mondays. For latest ticket prices and timetables please visit the official website.

Palma de Mallorca has some excellent golden sand beaches to choose from. Many holding Blue Flag Certification. The closest beach to the Palma city is Ca’n Pere Antoni which has a length of 750 metres.

Ca’n Pere Antoni gets much busier than some of the other beaches in Palma de Mallorca. Working our way east we come to Portixol Beach. This beach is much smaller at 100 metres in length and located on the outskirts of the city.

Ciudad Jardin Beach is further east. A beautiful beach with golden sand and a length of 450 metres. The promenade and cycle lane run alongside this excellent beach.

Further east still is the massive Playa de Palma beach (picture above). This beach has a length of over 4 kilometres of golden sand. Playa de Palma is actually one of the busier resorts along this stretch of coastline.

Located to the west beyond the marina are the beaches of Cala Major and Illetas. Both beaches are around 200 metres in length.

Please click the image below for a full size Google map of Palma de Mallorca. 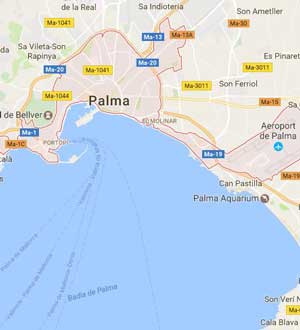 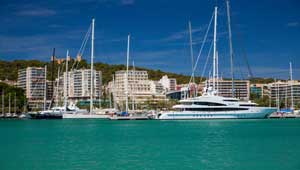 Port de Mallorca marina is one of the best marinas on the island with moorings for boats of 12 – 50 metres in length. The marina offers many extra services which include clamping and 24 hour surveillance. 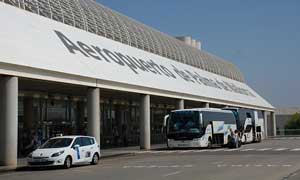 Palma Airport is lies 8 km east of the city centre. This airport services over 20 million passengers per year. Palma Airport is full of shops, restaurants and internet access. There are many extra services for VIP’s and those with special needs. Here you will also find excellent transport facilities. These include coaches, buses and taxi services. 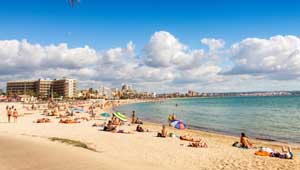 Playa de Palma is one of the top resorts in Palma which lies 10 km to the east of the city. The fabulous golden beach is is 4.5 km in length with excellent hotels lining the coastline. Hiring a car may be a good idea if you want to visit the city and explore the island. The buses tend to be less frequent outside of the city centre. 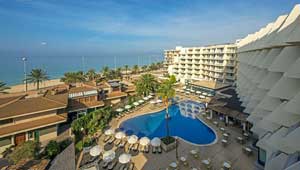 Iberostar is a luxury 5 star beachfront hotel with all the trimmings. Everything is here for an unforgettable holiday. This amazing hotel serves only the best international and local Majorcan cuisine. There are always plenty of mouthwatering seafood dishes on the menu. For total relaxation head to the luxury spa for a massage or to the fully equipped gymnasium for a workout.