Puerto de la Cruz is a City and tourist destination on the northwestern coast of Tenerife. This traditional Canarian City is one the top spots on the island for tourism. It’s continued to thrive for several decades now.

The population here has been increasing over recent years. This now stands at somewhere around 30,000 inhabitants.

This City was one known by it’s English name “Port of the Cross”. It’s now known worldwide by it’s Spanish name. The port was developed for it’s lucrative sugar cane industry for the La Orotava region.

Puerto de la Cruz became the first established tourist resort in the Canary Islands. This area is part of the province and capital of the island Santa Cruz de Tenerife which lies 30 kilometres to the east.

It’s noticeable how much this City varies from other areas of Tenerife. Puerto de la Cruz seems to keep much of it’s Canarian identity and character.

The landscapes in this region are lush green. There are several important botanical gardens and many more fruit plantations. The importance of tourism is evident with the many hotels that dominate the skyline. These include hotels such as H10 Tenerife Playa and Hotel Puerto de la Cruz.

Tenerife as a whole attracts up to 5 million visitors per year across it’s many top resorts. Several hundred thousand of those will be heading to Puerto de la Cruz for their holidays.

Top Attractions & Things to do in Puerto de la Cruz

When Loro Parque (Parrot Park) opened it’s doors in 1972, it housed only 150 parrots. There are now over 350 different species and over 4000 parrots. Loro Parque is now one of the top 3 attractions in Tenerife. You can now see all manner of shows which include dolphins and sea lions. The shark tunnel is also popular to get an underwater view of marine life. Land mammals here include tigers, jaguars, gorillas and chimpanzees.

The Botanical Gardens are the largest of it’s kind in Spain. This is also called The Garden of Acclimatization of La Orotava.

The Botanical Gardens house over 1500 different species of Canarian plants and trees. These cover an area of 7 acres (around 30,000 Sq ft). The gardens are a tropical oasis lined with palm tress and water fountains. There is also a beautiful assortment of Canarian flora.

Most that visit the gardens spend several hours here and still leave plenty to discover. This leaves an opportunity to visit a second time to discover the things you missed. The Botanical Gardens began planting in 1792 to acclimatise plants from the tropics. This makes this attraction the second oldest of it’s kind in Spain.

This in an excellent resource if you want to see some Botanical Garden Photography. That website contains some stunning imagery of these particular gardens. You can also view images of the various species on display.

The weather in Puerto de la Cruz is pretty good all year round. This area tends to be cooler than the southern parts of the island. The warmer summer months are usually between June until September. These months yield an average temperature of 24 Celsius. 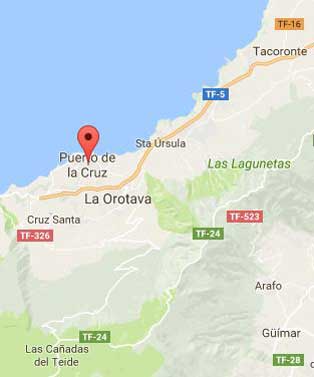 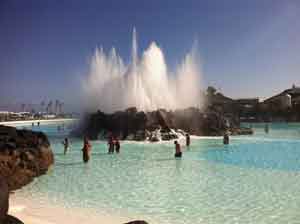 Lago Martiánez (Martiánez Lake) is a leisure complex and water park. This attraction covers an area of around 100,000 square metres. The central focal point is an artificial lake whose water comes from the Atlantic Ocean. Surrounding the main lake are a set of swimming pools, restaurants, gardens. There are also terrace areas to relax and enjoy the scenery and fine sculptures on display.