Home Balearics Articles Fun & Relaxing Thing To Do in Majorca 2020

Welcome to our guide about the top attractions and things to do in Majorca. This beautiful island is one of the top tourism locations in Spain.

Majorca is by far the biggest of the Balearic Islands in both population and land mass. The population of 850,000 inhabitants is the majority of the 1.1 million across the four main islands. These numbers swell during summer as millions flock here to enjoy the fantastic weather and famous beaches.

Majorca is home to some of the top attractions spread across the many beautiful resorts on the island. Whether it’s gothic cathedrals, medieval towns or ancient cave systems. Here there is something to enjoy for every type of traveller. Below are some of the top things to do in Majorca during your visit.

Palma Cathedral is the top attraction in Majorca which lies in the city of Palma, this is also the capital city of Majorca. Known also as La Seu, construction began on this cathedral in the thirteenth Century. King James of Aragon ordered the construction of La Seu after defeating the moors.

A great mosque once stood on the same site which was consecrated to the Virgin Mary. Construction then began on this gothic-style cathedral as it appears today. La Seu has seen many changes in it’s history with several major renovations. One of the most notable in recent times was by famous architect Antoni Gaudí.

You can visit the official website to find out more about the history of La Seu. This informative resource also provides opening times and other useful information. 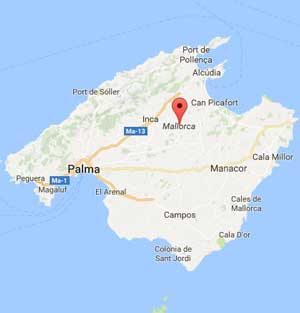 Relaxing Things to do in Majorca

Rather than only post the top attractions we wanted to list some that are off the beaten track. The two attractions below are among the most tranquil places to visit in Majorca. They also could not be much further apart. From the beautiful mountains in the northwest of the island to the natural park in the southeast

Mondragó Natural Park is one of the hidden gems that Majorca has to offer. This unspoiled area on the eastern coast is one of the few places to escape everything. There are no hotels or buildings here, only beautiful beaches and walking trails.

Mondragó Natural Park is a protected area with two lovely beaches and low occupation. More are discovering this area now so it’s best to go out of season if you want it to yourself. The beaches have some of the clearest waters on the island, ideal for snorkelling. There are also 6 walking trails here with varying distance where you can be at one with nature and the wildlife. The popular resorts of Cala d’Or and Cala Fererra are a short distance north of here.

Santuari de Lluc is one of the most incredible places in Majorca. Set up high in the mountains in the sacred forest is the first sanctuary on the island. This is a place of spirituality, tranquility and unspoiled countryside.

You could pay this beautiful oasis a visit or stay in one of the amazing apartments and enjoy it every day. Not far from the sanctuary is a campsite for those making a pilgrimage. Some of the main attractions here are the church, botanical gardens and a museum. There are many trails here for walking and cycling to explore Tramuntana mountains. You could also take the pilgrims trail, the most famous route into Lluc.

A visit to Las Cuevas del Drach is another of the top things to do in Majorca during your visit. These amazing caves lie on the eastern coast of the island in Porto Cristo. In 1922, work began on converting the caves into a tourist attraction. Completing the work in 1935 the caves were open for business with the addition of a new exit.

Las Cuevas del Drach (Dragon Caves) are actually as series of four caves. Each cave has different things to see and experience. Sea water from the Mediterranean has led to the formation of beautiful stalactites. The Flag, Baths of Diana and Snow-Capped Mountain are three such formations. All are lit using an intricate lighting system in different colours.

The tour will take around an hour to complete and take you on a journey through the caves. You end your journey with a boat trip across Martel Lake. While crossing the lake there is a classical concert which lasts for 10 minutes. Outside the caves there are picnic spots to enjoy some lunch. Extra facilities here include a souvenir shop and a bar-cafe. Tickets are 15 € for Adult and 8 € for children. The times can vary depending on when you go but you can visit the timetable here to plan your visit.


Fun Things to do in Majorca for Families

Built in 1311, the imposing Bellver Castle stands 112 metres above sea level. Set on a hilltop, this fortress of old offers spectacular panoramic views of the city of Palma. This castle sits almost opposite La Seu on the other side of the port.

Bellver Castle is one of the many fortified structures in Majorca. This offers an interesting insight into the history of the island. The circular shape of the building and towers are unique features. Among the other defensive features are a moat and a bridge which leads to the outer walls.

This would have been a formidable stronghold for any attacking force. The excellent preservation of the structure is likely testament to this. Tickets are usually priced at 4 €, you can check the official website for visiting times and more information.

Katmandu Park is one of the top things to do in Majorca for all the family. This super theme park immerses you in the mythical legend of Katmandu. Even the onsite hotel follows the theme of the mythical characters, Boro and The Great Yeti. Those who choose to stay at the 4 star resort get to enter 7 areas for free up to 6 pm.

There are many super attractions in the park that will thrill the young ones. The House of Magic, Splash Park, Soft Play, The Asylum and 4D Experience to name a few. There are also two mini golf courses that take you on a mythical safari of fun. For the over 12’s there is the super 3D Zombie experience to save Katmandu from the zombie apocalypse. Please refer to this link for more about the onsite hotel and attractions here.

Spending a day at the water park is another popular activity for the whole family. This island boasts many super water parks that offer the best in aqua fun in the sun. Hydropark in the popular Alcúdia is the only water park in the north of the island. One of the best in the south is Western Park in Magaluf.

There is quite a bit of variety when it comes to Hydropark with many water attractions. There are also some extras that you may not see elsewhere such as a barbecue and mini golf. You can enjoy a spot of lunch at the self service restaurant or enjoy drinks at Cafe Neptuno bar. There are not as many attractions at Western Park but it’s still a great family day out. The main areas here include Kidz world, Adrenaline and Family Fun.