The Costa Cálida or “Warm Coast” stretches for over 250 km´s of the Spanish coastline. This location lies on the southeastern coast below the Costa Blanca and above Costa Almeria.

The coastal areas here reside within the popular Spanish Region of Murcia. The Costa Cálida´s name (warm coast) is a derivative of the hot micro-climate and weather it enjoys. Murcia generally is one of the hotter parts of Spain with very little annual rainfall. The land is quite arid in comparison to other provinces.

The Costa Cálida extends from El Mojón in the north which borders with the province of Alicante. It then continues all the way south to town of Águilas.

If beautiful sandy beaches is your thing then this is the place for you. Most of the 250 km coastline is covered with over 150 beaches. Here you will find some of the best cities on the eastern coastline of Spain. Cities such as Murcia City to the west and Cartagena to the

Top Resorts On The Costa Cálida

The Costa Cálida is popular for tourism across it’s many resorts but also attracts plenty of golfers. There are many great resorts that offer a good balance of beaches and golf. La Manga del Mar Menor, Mazarrón and Los Alcázares and several great examples. Below is some info about the top locations here.

La Manga
La Manga is a famous 22 km strip`of land which stretches across the Mar Menor lagoon. The strip connects to the mainland both from the north and south. This is also the location for the La Manga Club resort which attracts the rich and famous. The resort boasts a super golf course, other sports facilities and a luxury spa.

Los Alcazares
Los Alcazares is a coastal area which lies west of La Manga strip. This area is very Spanish and contains some of the top beaches on the Costa Calida. Los Alcazares regularly hosts a super air show which attracts people from all over the world. Here you will also find some many excellent golf courses.

The map of the Costa Cálida displays the geographic area which extends for 250 kilometres. This runs from El Mojón in the north to Águilas in the south. The strip of land to the east is La Manga, the stretch of water it crosses is the saltwater lagoon the Mar Menor. Some of the other popular areas displayed on the map are Mazarrón and Los Alcázares.

Cartagena in Spain lies on the south-eastern Mediterranean coastline. This Spanish Costa is the Costa Calida and part of the Region of Murcia. This ancient city dates back to around 220 BC when the Roman empire named it “Carthago Nova”. New Carthage in the English language.

Cartagena is also the the home of one of Spain’s most important Naval ports. This strategic location is the most important in the western Mediterranean Sea.

The shipping yard in this important city is still used to build ships and submarines. The port of Cartagena has seen many battles fought, especially over the last 500 years. Cartagena is rich in history with heavy influences from civilisations. This is especially true of the Roman Empire and invading Moors.

The Roman Theatre is one example of ancient remains in this city. Remains are still visible from the Phoenician, Byzantine, Moorish and Roman periods. The cultural importance of this city has been growing in recent times. The port has also become a major cruise ship destination. This wonderful city now welcomes millions of visitors each year.

The metropolitan area of Campo de Cartagena now has a population 400,000 inhabitants.

Attractions and things to do in Cartagena

There are many fantastic attractions and things to do in Cartagena. Most of the things to see are of historical importance. This is true Roman Theatre Museum or “Teatro Romano de Cartagena” in the Spanish language.

Constructed between the 5th – 1st century BC, the Theatre was dedicated to Gaius and Lucius. These were the grandsons of the mighty Roman Emperor Augustus Ceasar. This amazing building was not discovered until the last 1980’s. This ancient contruction has since been restored to form the Roman Theatre Museum.

Built between 1900-07 the Palacio Consistorial replaced the smaller old town hall. This coincided with a big population boom in Cartagena at the turn of the century.

This majestic building’s facade is carved in white Marble. The dome structure on the roof from Zinc. The columns and much of the facade have carved emblems. These emblems depict the city, castles, shields and the crown of Cathago Nova. The same crown given by Roman general Scipio when he took Cathago Nova.

Please click the image below for a full size Google map of Cartagena in Spain. 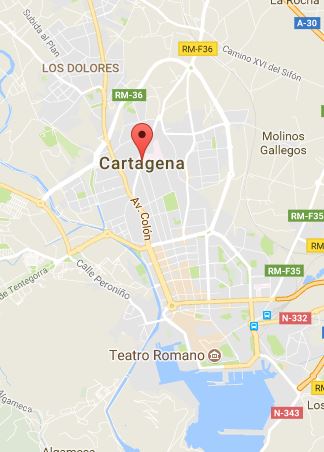 The Province of Murcia is one of largest and most populated in the whole of Spain. Murcia is the seventh biggest Spanish City with around 500,000 inhabitants in the city alone. This makes up around a third of the population of the whole region.

The coastal area of the Costa Calida or “Warm Coast” in English is part of the Province of Murcia. This part of Spain sees millions of visitors every year. There are many popular tourist locations on this Mediterranean coastline. These include, Aguilas, Cartagena, Los Alcazares, Mar Menor and La Manga del Mar Menor.

Murcia is currently serviced by San Javier airport which is around 45 km away from the city centre. Alicante is some 70 km away with the new airport of Corvera only 23 km.

Corvera airport is still not open due to contractual problems and other politics. The plan was to phase the air traffic away from San Javier in favour of Corvera.

Other transportation facilities include buses, trams and a train system run by RENFE. This connects Murcia with Madrid via Albacete. There are many other notable locations within easy reach of this city. These include Valencia, Catalonia, Aguilas and Cartagena.

Cathedral de Santa Maria in Murcia is the most visited attraction in the city. The initial work started on the Cathedral in 1394 and was completed in 1465.

Over the centuries the Cathedral has undergone many changes to the original structure. This includes the impressive bell tower built between 1521 – 1791 and stands at 300 ft tall.

The interior and exterior of the Cathedral are a mixture of styles which include Baroque, Renaissance and Gothic.

Please click that image below for a full size Google map of Murcia. 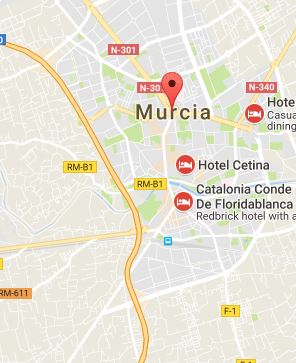