The Costa Dorada is another of the leading Spanish Costas. This area of Spain stretches for 215 km of the northeastern coastline. The Costa Dorada or “Golden Coast” is a reference to colour of the sand when the sun reflects off it’s beaches.

There are a total of 20 towns along the coastline stretching from Alcanar in the south to Cunit in the north. The most popular coastal town is without doubt Salou. This popular tourist destination is only 20 minutes from Reus airport.

With so many great towns to choose from along the Costa Dorada coastline you are spoiled for choice. Much of this region still maintains it’s history and culture. There is a heavy Spanish and Catalan influence here that is very evident.

Catalan is the native language of Catalonia and also the language spoken here. Catalonia is the second biggest region of Spain after Andalucia. Below we provide information about some of the more popular towns on the Costa Dorada.

Salou is popular with the Brits and other northern Europeans. Millions flock here to spend their summer holidays. Salou is known for it’s fantastic sandy beaches and the super PortAventura theme park resort. In total, Salou has over 30 Blue Flag beaches with the longest being Llevant Beach. The Passeig Jaume I promenade runs alongside Llevant Beach.

PortAventura houses luxury hotels on the resort and the Costa Caribe Aquatic Park. The theme park boasts one of the fastest roller-coasters in Europe. There are also many other thrilling rides to enjoy here.

This popular Spanish Costa lies on the northeast coastline of Spain, just south of Barcelona. Please refer to the Costa Dorada map below and click if you would like to see a full size Google map. 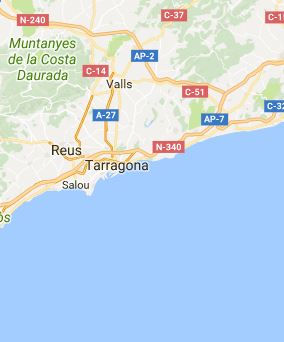 Cambrils is another popular town on the Costa Dorada which lies south of Salou. Unlike Salou, Cambrils is very Spanish with many Spaniards owning second homes here. This area was a small fishing town like many others along this stretch of coastline.

Tourism, agriculture and other industries have led to heavy investment here. This has resulted in large re-development over the last half a century.

Cambrils has a pretty harbour and some interesting things to see. These include the Torre del Port (port tower), two museums and a newly developed park.