The Delfin Submarine Museum in Torrevieja is a unique experience. A fun an interesting day out for the whole family. Located at Torrevieja’s inner harbour, the museum is an actual submarine. Donated to the town hall of Torrevieja when it was taken out of service.

The submarine received it’s flag of combat in the port of Torrevieja in 1974. After all these years, this man of war has found the perfect resting place. The Delfin has been restored and looked after since it first opened as a museum in May 2004. There are many popular museums in the Alicante region. The Delfin (Dolphin) is one of the most unusual. 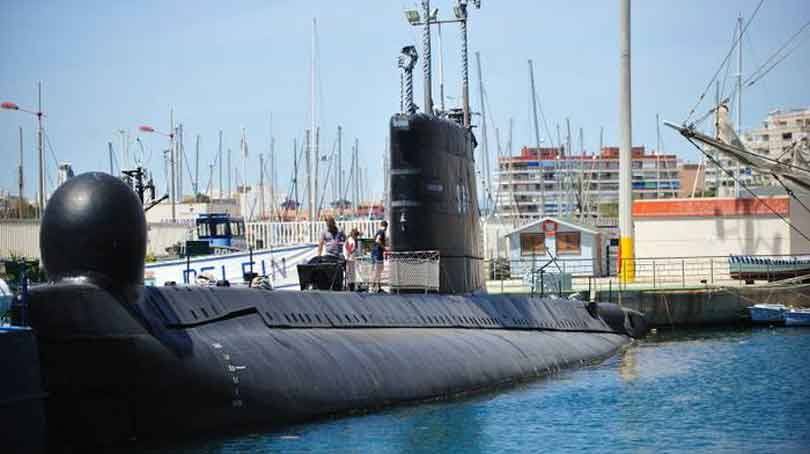 The Delfin is a Daphne S-61 class submarine. The sub measures a little under 58 m in length and 6.8 m at it’s widest point. The widest point is where it housed it’s torpedo’s and stabalising equipment. When in operation the Delfin could remain submerged for up to a month. The Delfin could travel at a top speed of 15.5 knots for 4,500 nautical miles without refueling.

The official crew consisted of 56 submariners. The crew had to share compact bunks, bathrooms and working areas. After so many days submerged, the sub was claustrophobic and very smelly.

The Spanish Navy has a height limit of 1.7 m. This was due to the compact size of the S-61 class sub. Massive progress in telecommunications is evident since the Delfin first sailed. You will see the mass of cables and wires lining the interior. These wires and cables would have been a major issue when the S-61 went to Sea 40 years ago.

The Delfin Submarine Museum in Torrevieja has a very reasonable entrance fee of 2 €. The normal opening hours are Wednesday to Sunday 10 am to 2 pm. The museum is closed on rainy days and festival days.

Below is a rough location of the Submarine Museum, Please click the image to view a full size Google map.

The video below gives a great insight into the Delfin S-61. The video starts outside the sub before showing you inside also