Andalucia is an autonomous region that lies is southern Spain. This is the largest of the Spanish regions with close to 8.5 million inhabitants.

Andalucia is a quite rocky and mountainous. This part of the country is firmly rooted in it’s Spanish traditions. Tapas are more famous here than in any other part of Spain. Flamenco music is also associated with this area.

This part of southern Spain was under Moorish rule between the 8th – 15th Century. As a result you can find many famous Moorish buildings and landmarks here. Some examples are Alcázar Castle in Seville, Córdoba’s Mezquita and Granada’s Alhambra Palace.

The popular Spanish coastal area the Costa del Sol lies in southern Andalucia. Here you can find the popular tourism cities of Malaga and Marbella. Granada and Seville lie further to the north. The southern coast boasts some of the most beautiful beaches in Spain along it’s 150 km coastline.

The 8 Provinces of Andalucia

Andalucia is so vast that it consists of 8 different provinces. Almería, Cádiz, Córdoba, Granada, Huelva, Jaén, Málaga and Seville. This massive autonomous community covers a landmass of 87,000 km². Of all the regions of Spain, only Castile and Leon has a bigger landmass.

Below we provide information about each province and their places of interest.

Seville is the largest city and also the capital city of Andalucia with over 700,000 inhabitants. The total population is actually over 1.5 million inhabitants. This includes the surrounding metropolitan areas on the outskirts of the city.

The beautiful city of Seville is not only the fourth largest city in Spain. It’s one of the most important from a cultural and historical point of view. The top attractions here include Plaza de España (picture above), Alcázar Castle and Maria Luisa Park.

The locals are very proud of their culture. Collectively known as “Sevillanos” with the females being “Sevillanas”. Bullfighting is popular in Seville but this city is more famous for Flamenco music. You will often see the Sevillana Flamenco dancers with their distinctive red dresses.

Málaga is another large city and also a province in southern Spain. The population here is close to 600,000 inhabitants. The surrounding metropolitan areas take this number to well over 1 million. This makes the super Málaga the 6th most populated city in Spain.

Málaga is one of the oldest cities in Spain. The history of this city goes way back to the Phoenicians some 2800 years ago. Like all southern Spain, Málaga was under Moorish rule for almost 800 years. Málaga was retaken during the Reconquista which ended in 1492.

The Arabic influence here is stronger than in any other part of Spain. This is evident in the number of Moorish buildings such as the Alcazaba of Málaga.

The coastal towns and areas that lie to to west are known as the Costa del Sol. These areas are all busy tourist destinations. Many of which welcome millions of visitors each year to their golden beaches.

Córdoba lies to the east of Seville and north of Málaga. The population of Córdoba is around 320,000 inhabitants. Like Málaga, this city retains much of it’s Arabic history and architecture.

This is one of the hottest cities in the country. The average temperature in the summer months is as high as 28 Celsius.

The second largest old town in Europe is in Córdoba. Here there are also many Roman buildings and remains. These remains include a Roman bridge, the Roman Temple, the Theatre, and Mausoleum.

The Great Cathedral of Córdoba (Mezquita de Córdoba) is in this city, this is also a Unesco World Heritage site.

Córdoba was re-captured from Muslim rule by Ferdinand III of Castile in 1236.

The beautiful city of Granada lies to the east of Málaga and west of Almeria on southern coastline. Granada is also the location for one of Spain’s most famous and recognisable buildings. The majestic Alhambra.

The view of the Alhambra (image above) with the Sierra Nevada mountain range is incredible. This is one of the most picturesque and photographed views in all Spain.

The population of Granada is somewhere around 240,000 inhabitants. This is double that when including the urban and metropolitan areas. The land mass of 7,000 square miles is full of fantastic architecture. These include Granada’s Cathedral and Generalife Palace.

Cádiz is one of the smaller cities in Andalucia, the port is actually the home of the Spanish Navy. This city sits on a narrow strip of land in the sea, just off the mainland. The population here is around 120,000 inhabitants. Unfortunately, there is no way to extend the land due to the restrictions of the sea. Laws now in place also prevent reclaiming space from the sea.

Cádiz is one of the oldest inhabited European cities of the ancient world. This city has traceable roots back to the Phoenicians.

The views on offer here are spectacular with more well preserved architecture. This includes Plaza de San Antonio and church and Cádiz Cathedral.

Almería is the most eastern of the 8 provinces of Andalucia. The population here is edging towards 200,000 inhabitants.

Agriculture is big business in Almería. Here there are thousands of greenhouses providing vegetables to much of Europe. Throughout history and right up to the 20th Century. Mineral and Ore mining was a lucrative source of income. El Cable Inglés is a big structure that was used to load minerals onto waiting ships in the port. This mineral loading station can still be seen today. It has recently undergone development work to make it a tourist attraction.

Almería boasts it’s own architecture such as the Alcazaba fortress (picture above). The ancient walls of Jayrán is also a major attraction.

Huelva lies to the west of Seville and north of Cádiz. This city actually sits on the Gulf of Cádiz. There are many similarities between the two cities. Huelva is also known to have been inhabited for over 3000 years.

Huelva was a small city but the population has rocketed up to 150,000 inhabitants. This is due to the mineral mining boom in the 19th Century. Rio Tinto was the biggest mining company in Huelva during the boom.

It’s interesting to see English style suburbs here. The Queen Victoria district here (picture above) is a good example of this. Plaza De Las Monjas and Castillo de Niebla are two of the beautiful landmarks worth checking out.

Located in the Santa Catalina mountains, Jaén is a beautiful. Jaén is also one of the largest producers of Olive Oil in the world. This city boasts some beautiful landmarks and architecture. These include Saint Catalina’s Castle (picture above) and Jaén Cathedral.

The image below displays the 8 provinces that collectively form the autonomous community of Andalucia. 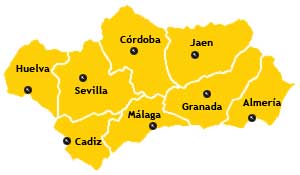 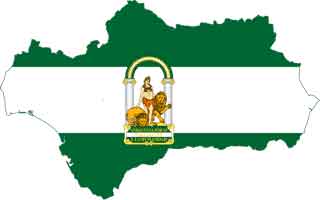 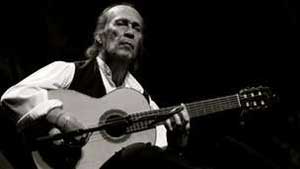 Andalucia consistently produces people that achieve great fame in their respective professions. Paco de Lucia (picture above) was arguably the greatest Flamenco guitarist that has ever lived until his recent death. The painter, artist and sculptor Pablo Picasso represents Andalucia as one of the many great Spanish artists. The top actors include Antonio Banderas who was born in Málaga. David Bisbal and Estrella Morente are two other leading musicians from southern Spain.